For the second part of our honeymoon trip, my husband and I flew from Bangkok to Siem Reap through Don Mueang International Airport. We left early to avoid traffic. It was still almost an hour drive to the airport for a 800 baht fare. It was a short 1 hour flight. We had a little delay getting out of the custom. Based on my research, we didn’t need a visa. But when i asked a personnel where should we get in line while showing him my Philippine passport, he directed me to the line for visa application. I was surprised and we didn’t have any passport photos. Good thing the service was fast and when we got to the counter, we did not need a visa! I guess the first guy did not understand me! It should have actually been straight forward since it’s a small airport. But “everyone” was getting in line and I just wanted to make sure we’re going the right way so I asked. Nevertheless, we got out before our pick up time. Our driver Khim of Happy Angkor Tour dropped us off at the Angkor Paradise Hotel for $8.00. It was about a 15-minute drive… not bad! We were too early for check-in, so we just ate lunch at the restaurant and waited at the lobby for Bomey and Khim to start our half day tour. 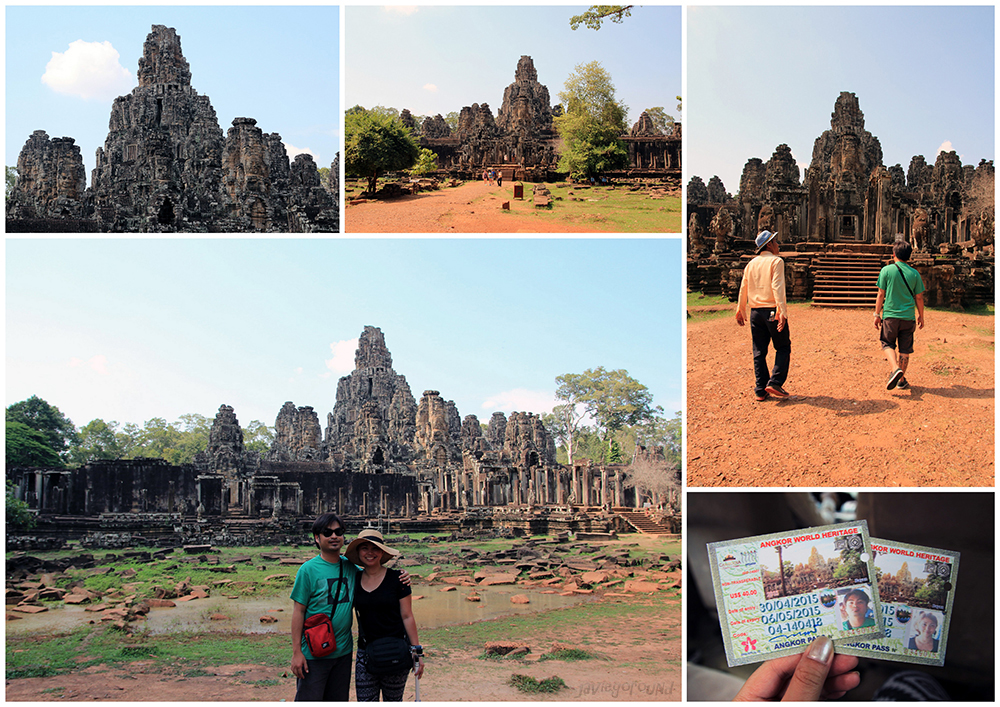 We bought a 3-day Angkor Pass for $40 each. Our first stop was the Bayon. It’s the center of the Angkor Thom, the last capital city of the Khmer empire. 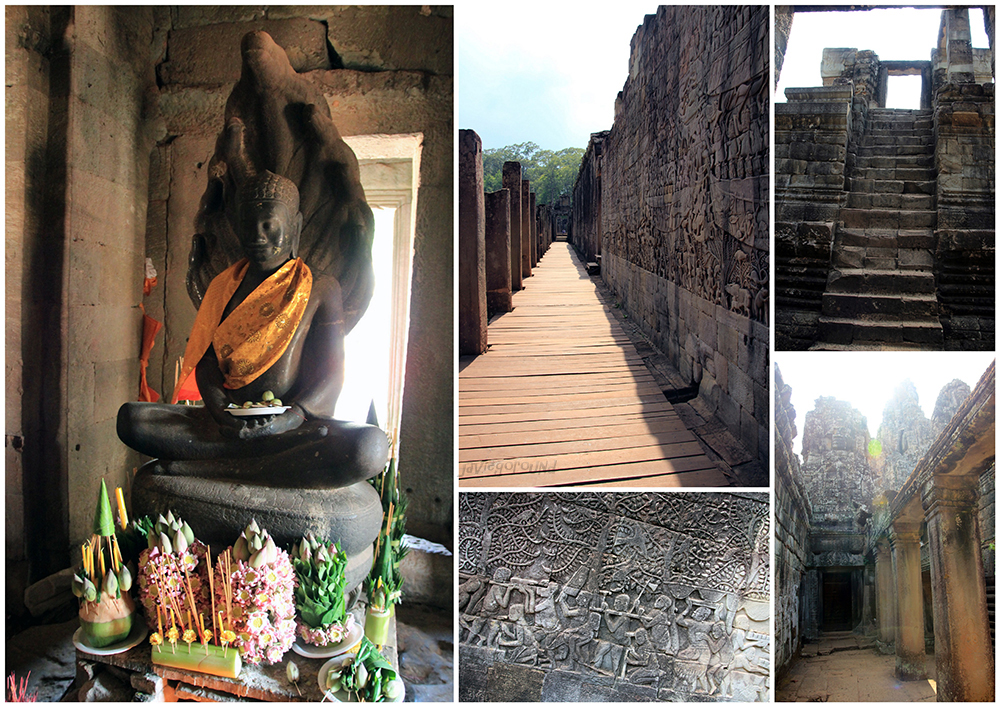 The walls still had carvings of the Cambodian life. Bayon was the official state temple of King Jayavarman VII. 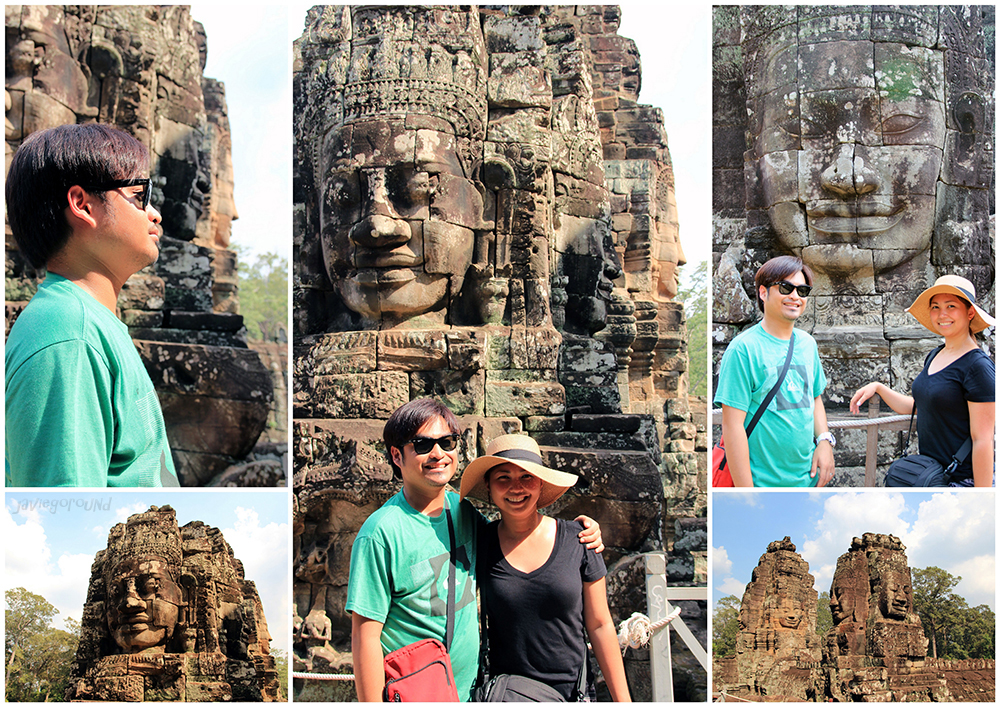 “The Bayon’s most distinctive feature is the multitude of serene and massive stone faces on the many towers which jut out from the upper terrace and cluster around its central peak. The temple is known also for two impressive sets of bas-reliefs, which present an unusual combination of mythological, historical, and mundane scenes.” (source) 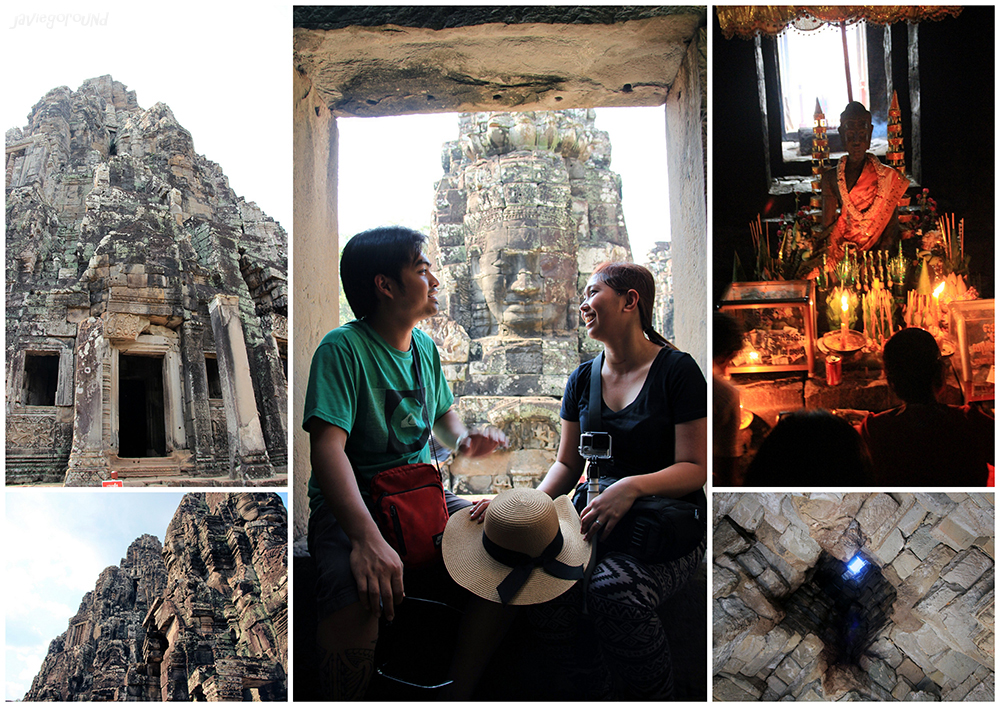 “According to scholars, King Jayavarman VII bears a strong resemblance to the face towers of the Bayon.” (source) 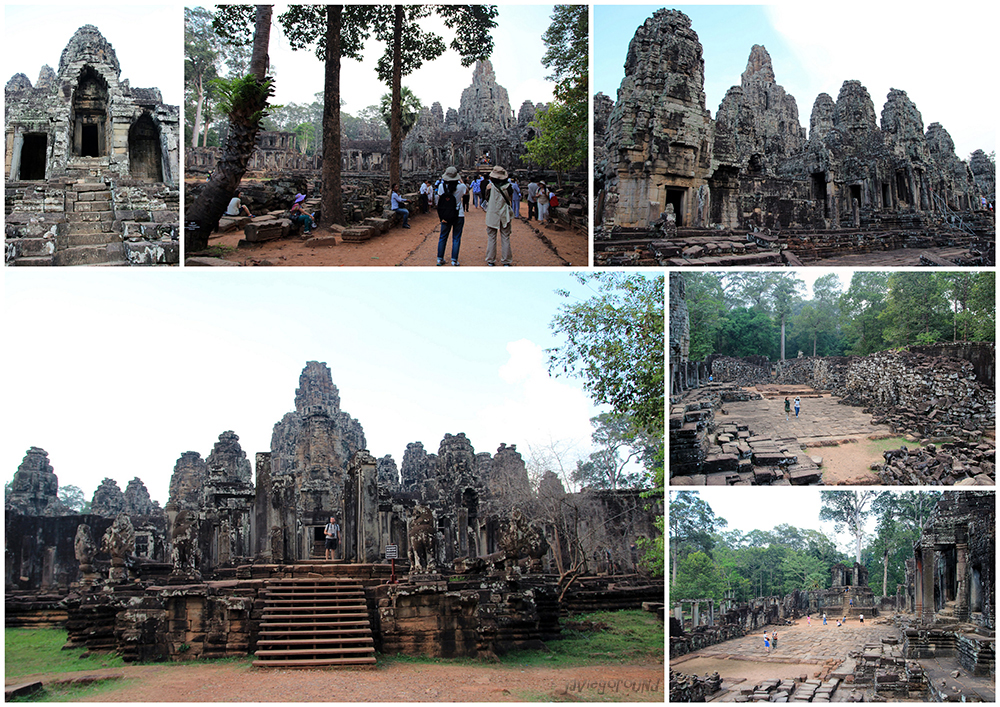 The Bayon was featured in the movie Lara Croft: Tomb Raider. 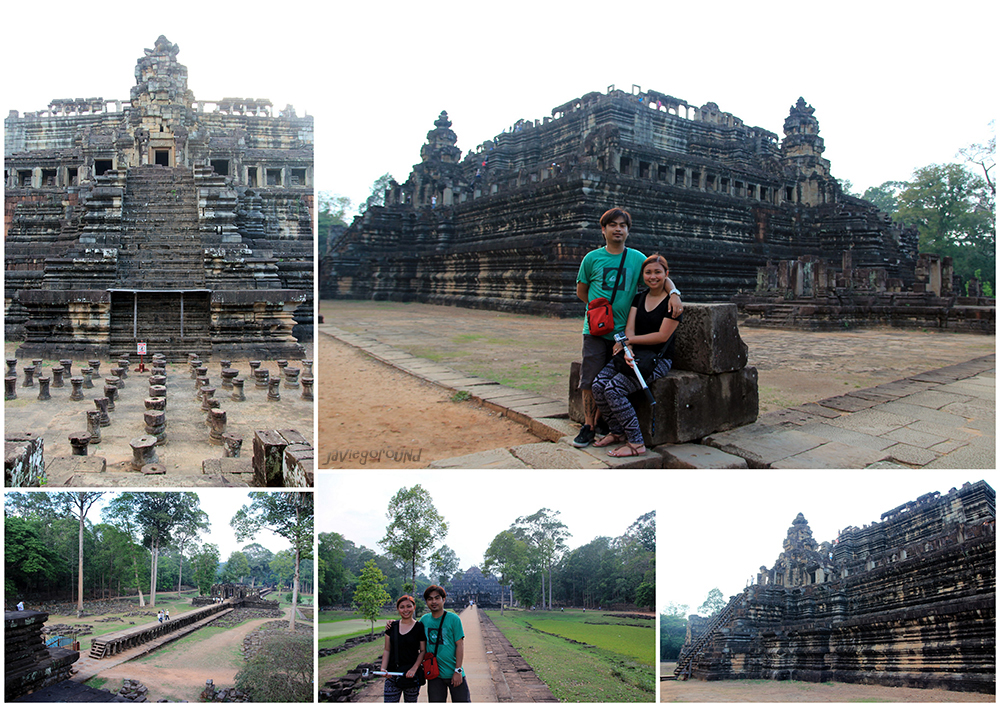 Not far from Bayon was Baphuon. It was made in mid-11th century for the Hindu god, Shiva. 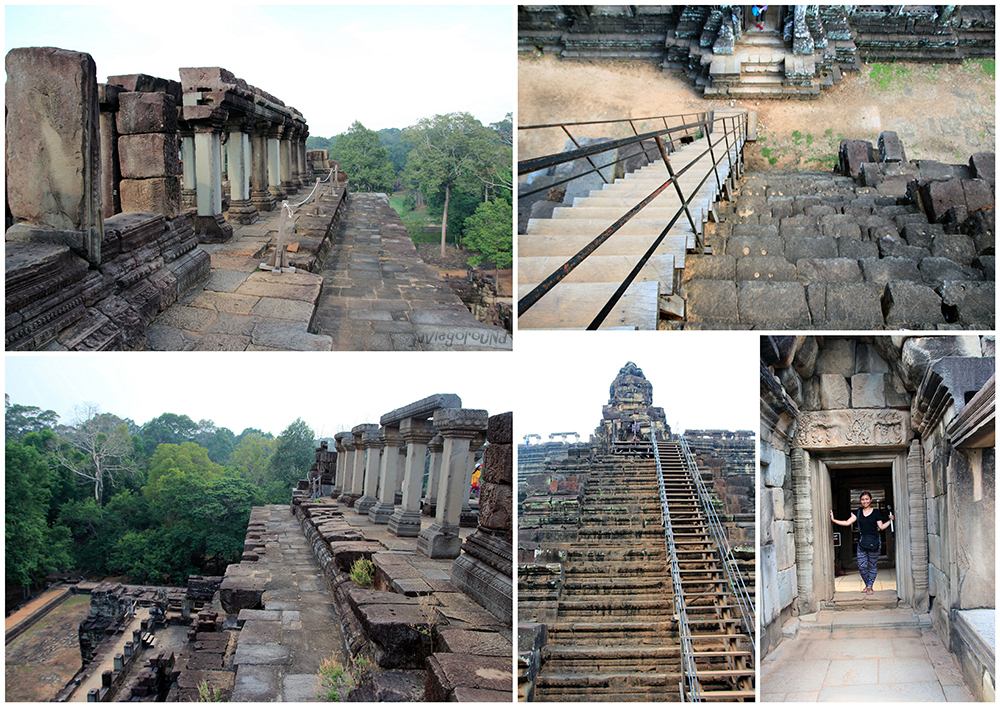 The steps were steep, thank goodness they made stairs more suitable for tourists! 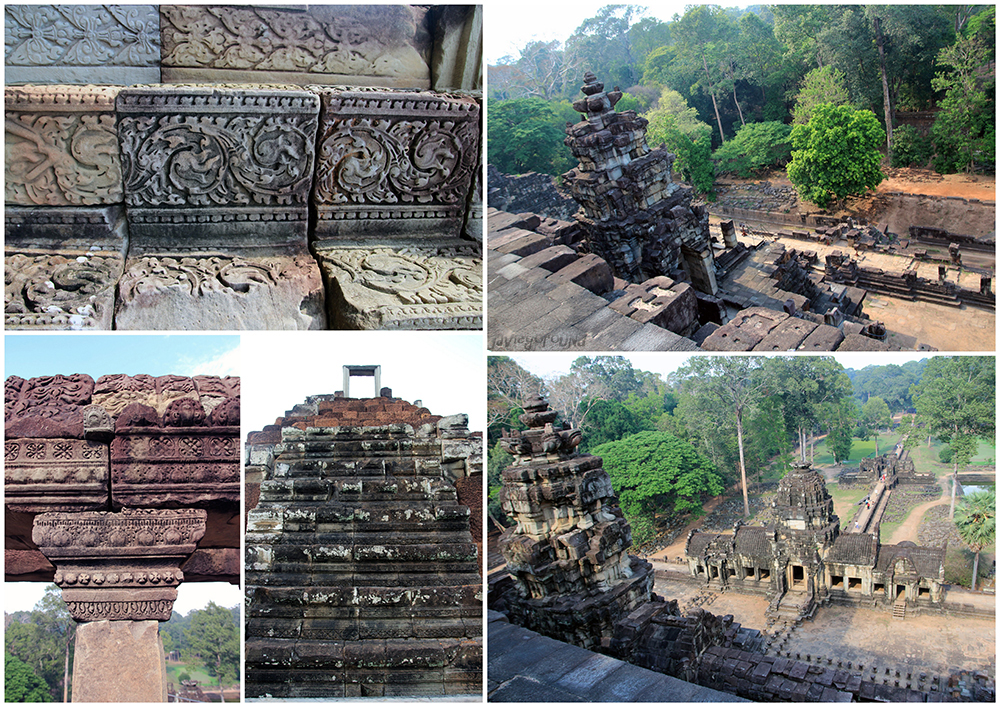 There were not a lot of people when we got there, which was nice. “The temple was built on land filled with sand, and due to its immense size the site was unstable throughout its history. Large portions had probably already collapsed by the time the Buddha was added.” (source) 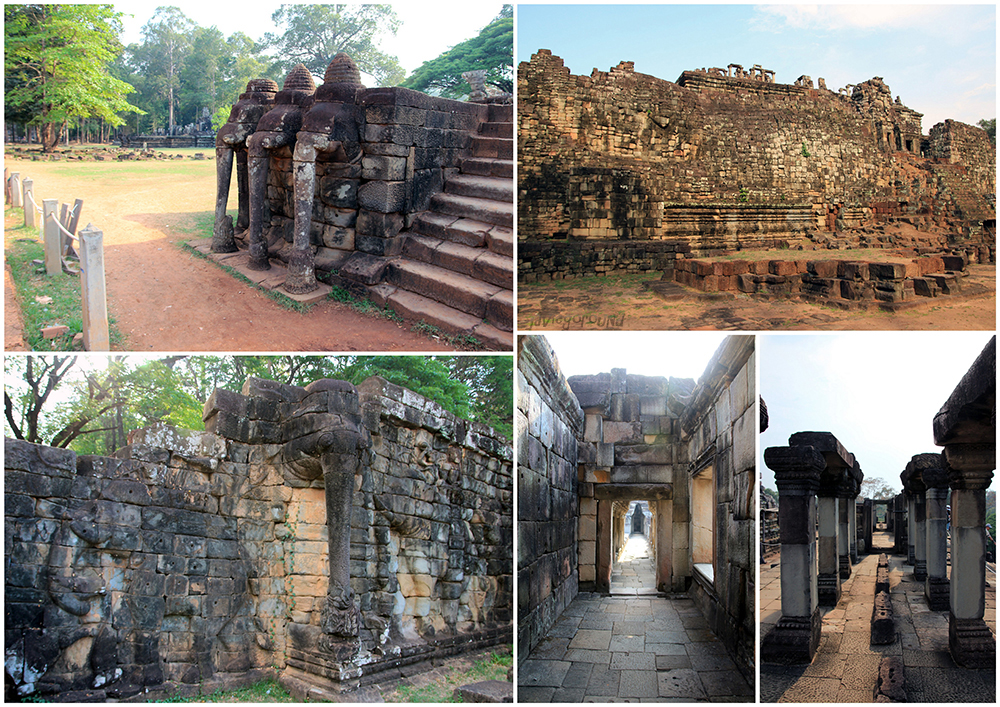 And a few meters away was the Terraces of the Elephants. “The Terrace of the Elephants is part of the walled city of Angkor Thom, a ruined temple complex in Cambodia. The terrace was used by Angkor’s king Jayavarman VII as a platform from which to view his victorious returning army.” (source) 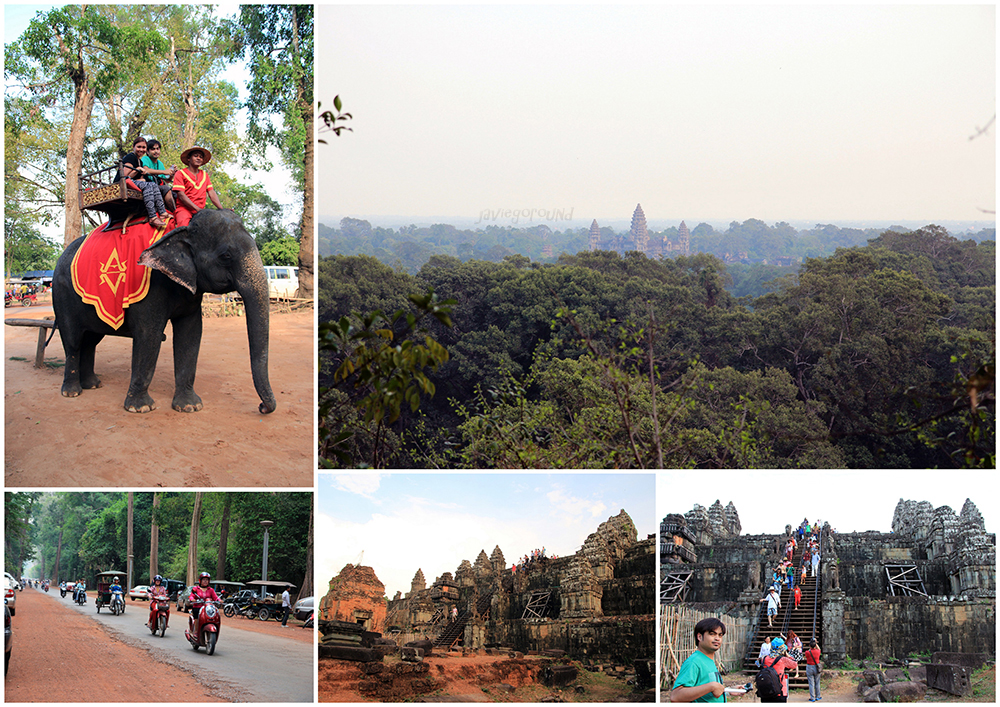 We were supposed to wait for the sunset at Phnom Bakheng. We reached the foot of the temple with the help of an elephant, but still had to climb a flight of stairs to get on top. It was getting crowded and the sun was still high. After resting for a bit, we decided to just leave since it was too cloudy. It was a long walk going down. It was still early to end the tour. There were stalls across the street, so we just bought souvenirs instead. 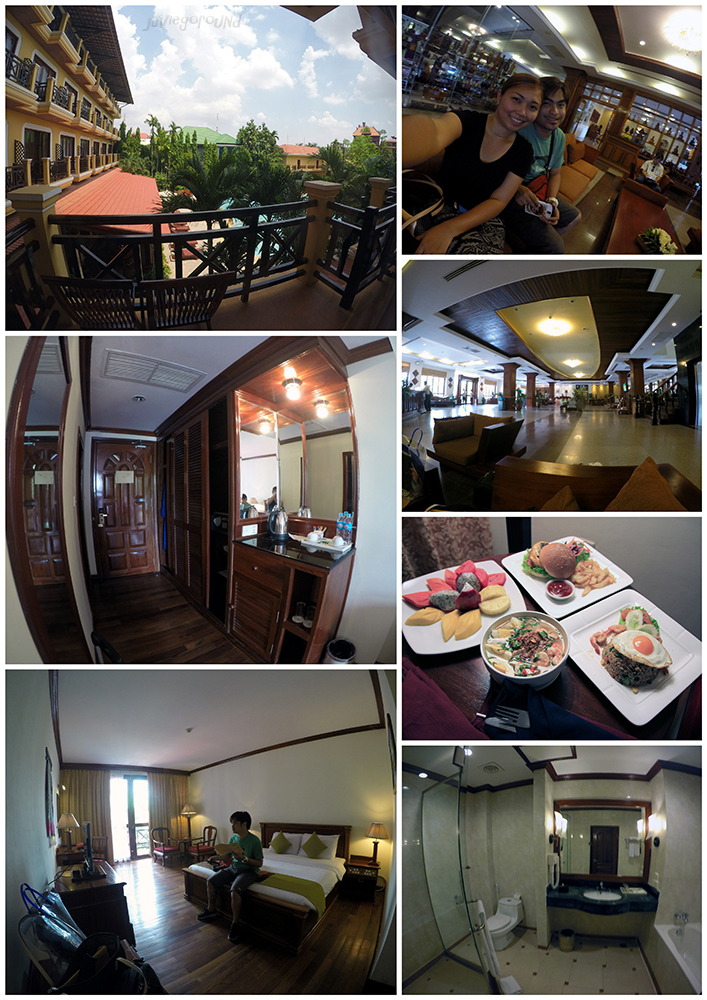 After the long walks, time to stuff our tummy and retire to bed! 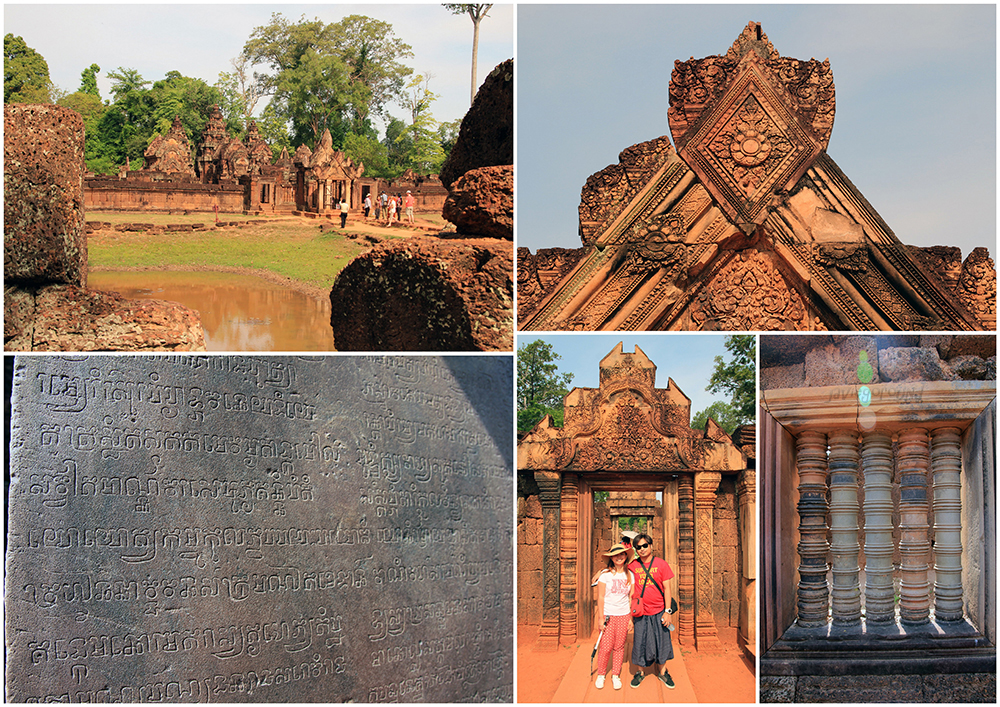 After our buffet breakfast, we started our whole day tour at Banteay Srei. It’s a 10th century temple made for Shiva. 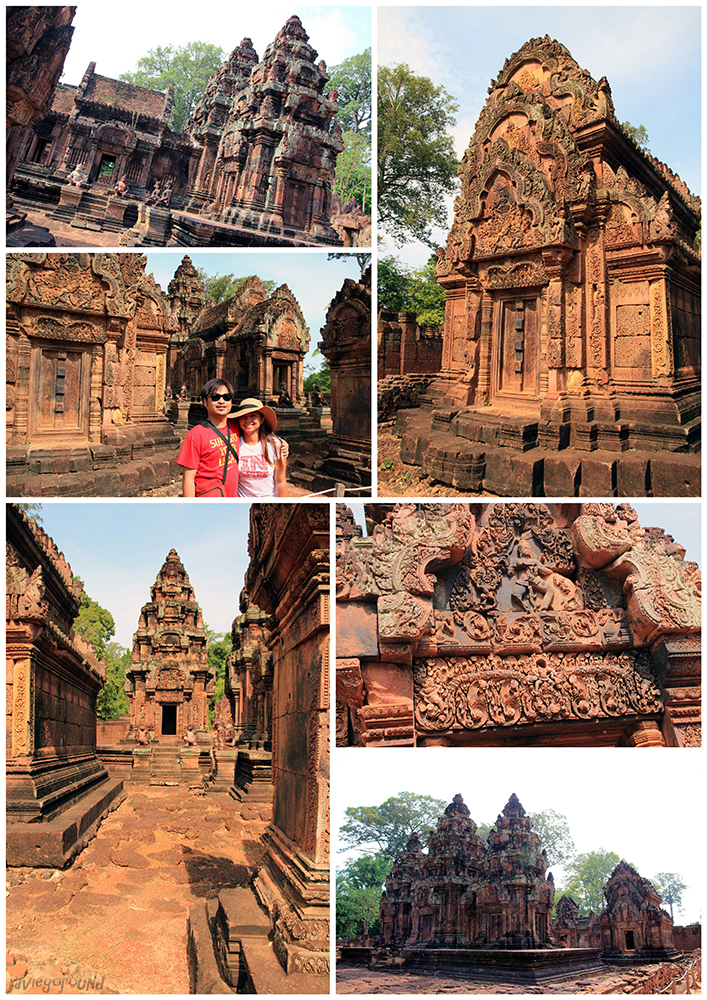 It’s made of red sand stones and the carvings are still visible even up to this date. Although, they put a line so tourists can’t touch the walls. 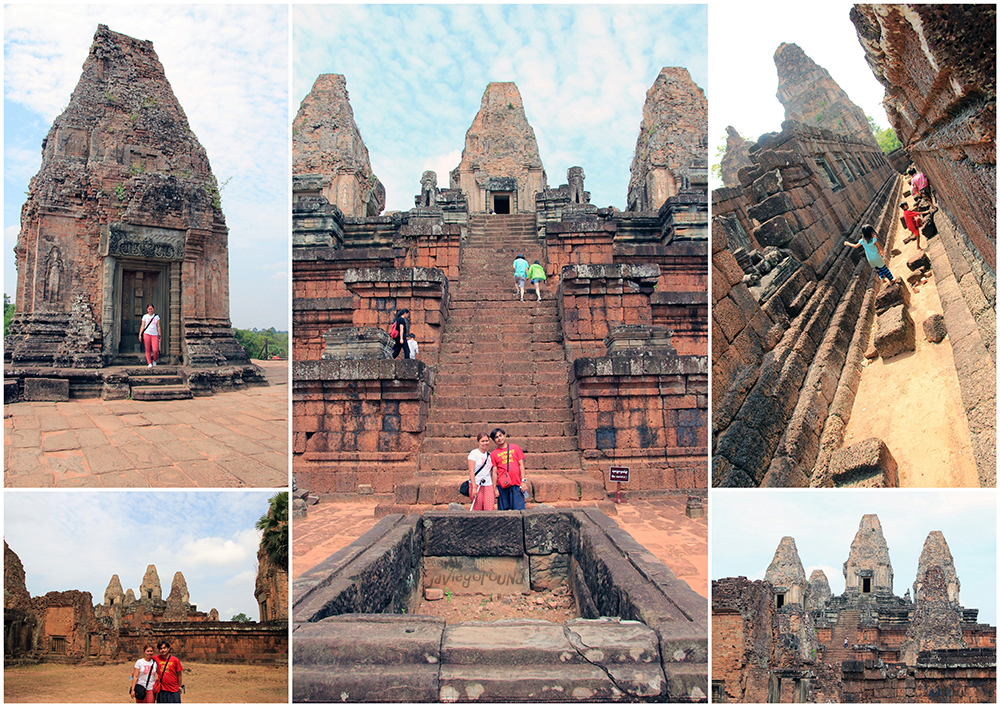 Pre Rup was a temple mountain of King Rajendravarman. “The temple’s name is a comparatively modern one meaning “turn the body”. This reflects the common belief among Cambodians that funerals were conducted at the temple, with the ashes of the body being ritually rotated in different directions as the service progressed.” (source) 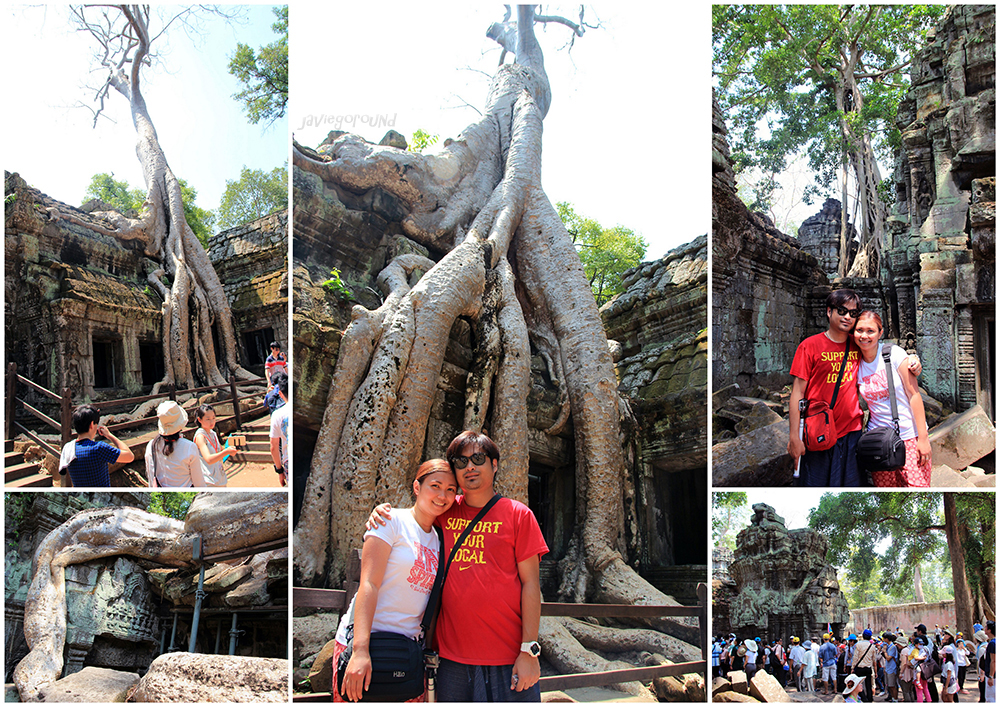 Another famous temple featured in Lara Croft: Tomb Raider is Ta Prohm. It is listed in UNESCO World Heritage and one of the most visited complex. 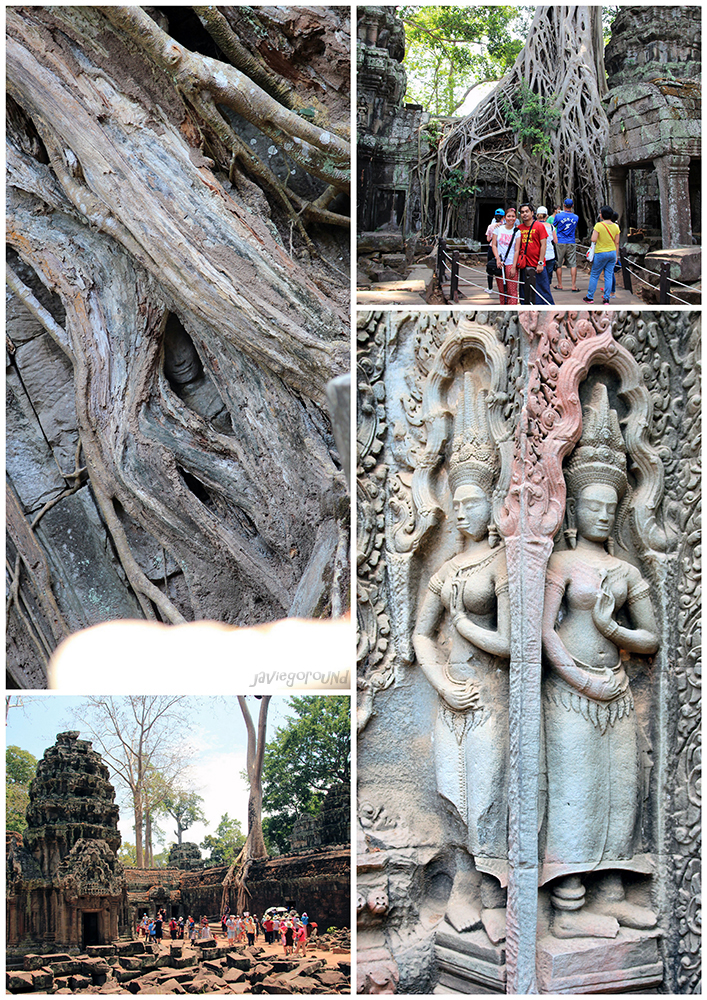 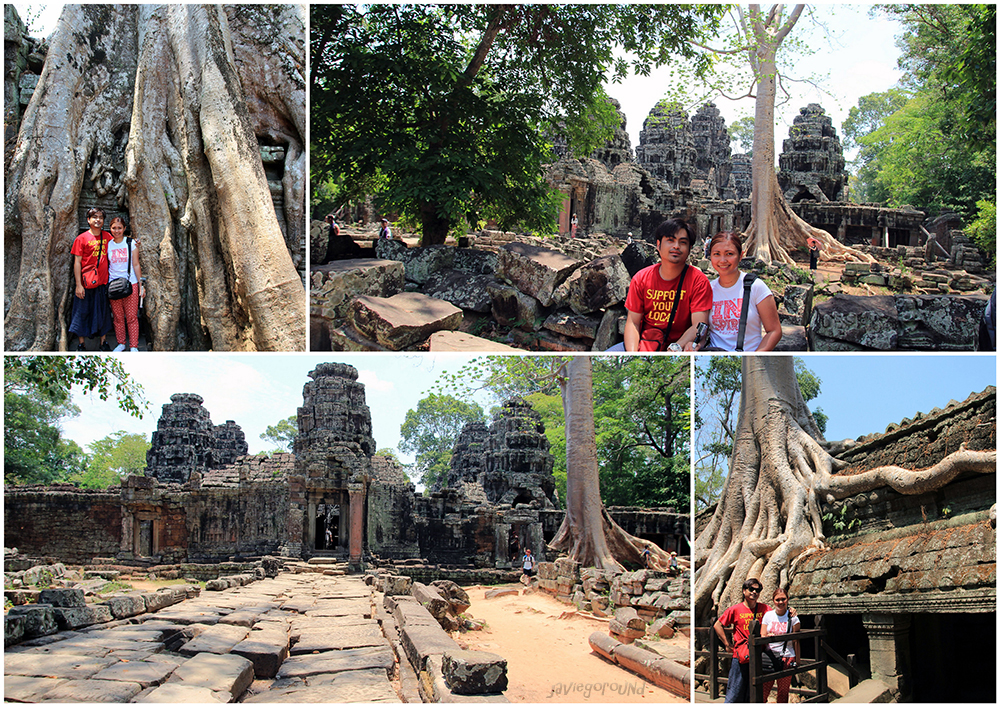 “Unlike most Angkorian temples, Ta Prohm has been left in much the same condition in which it was found: the photogenic and atmospheric combination of trees growing out of the ruins and the jungle surroundings have made it one of Angkor’s most popular temples with visitors.” (source) 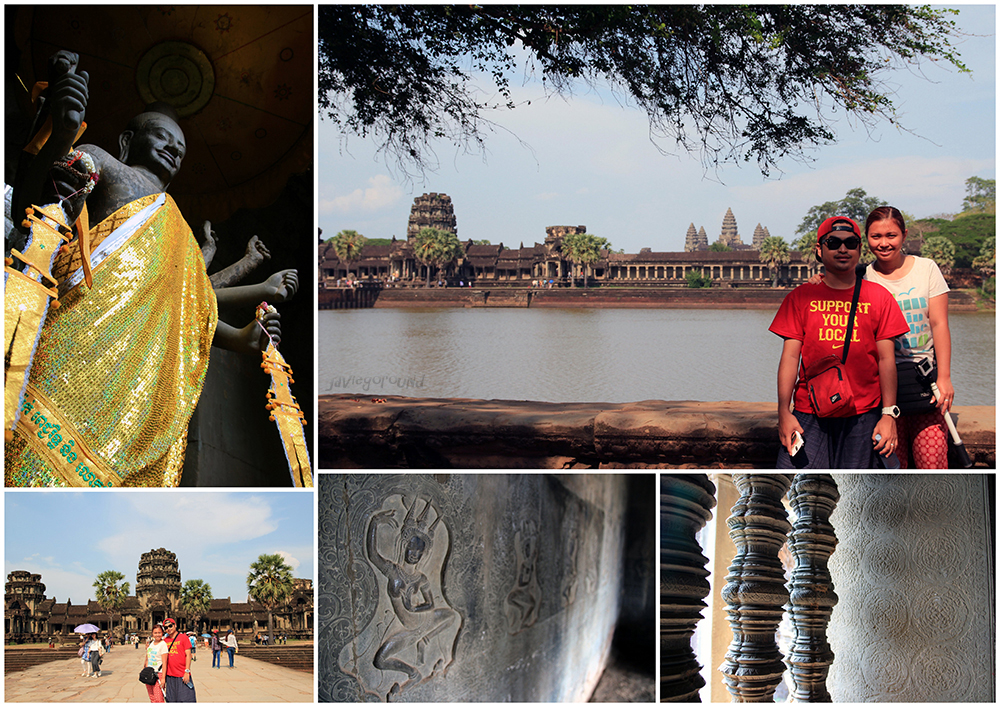 And finally… the Angkor Wat. It is always amazing to see in person something that you’ve just read in books or seen in photos. And the details found inside the complexes are beyond astonishing. 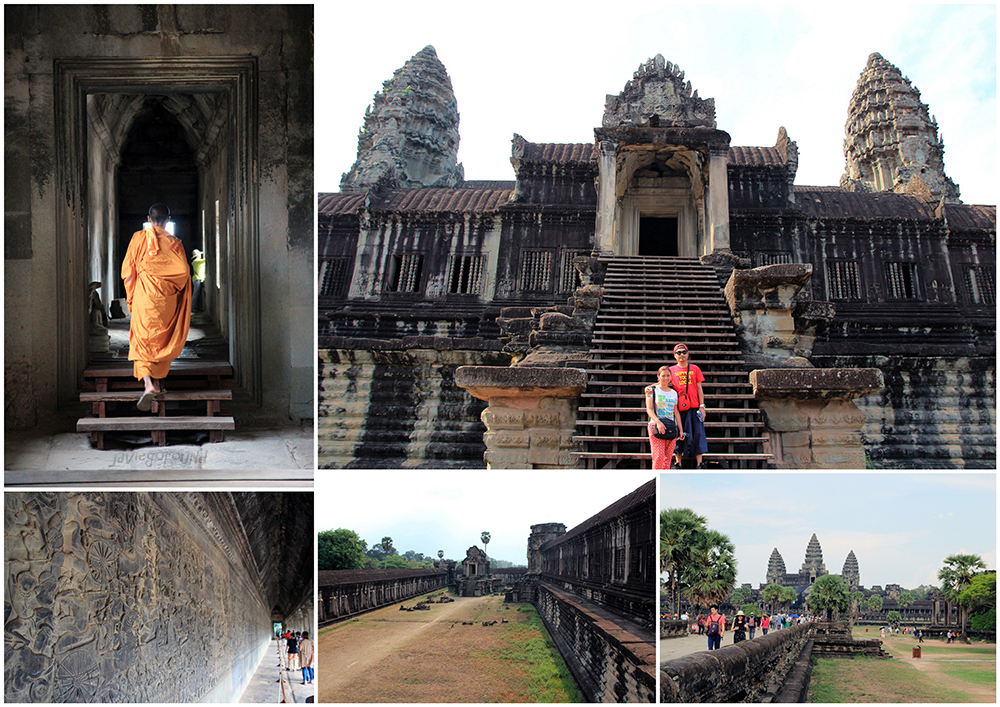 Angkor Wat is the largest religious monument in the world. It is also listed in the UNESCO World Heritage. It was a Hindu temple and was later changed to a Buddhist. The temple’s modern name means “Temple City.”

There’s a very long line to get on top of Angkor Wat. But I think it’s worth the climb since the tour wouldn’t be complete without seeing “every inch” of it. 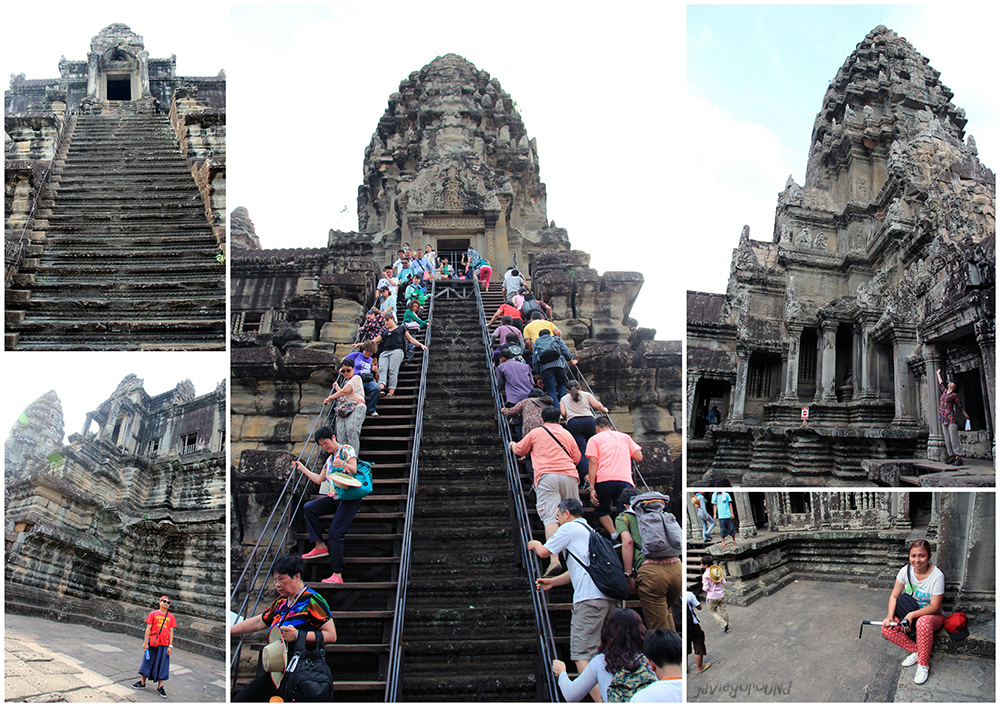 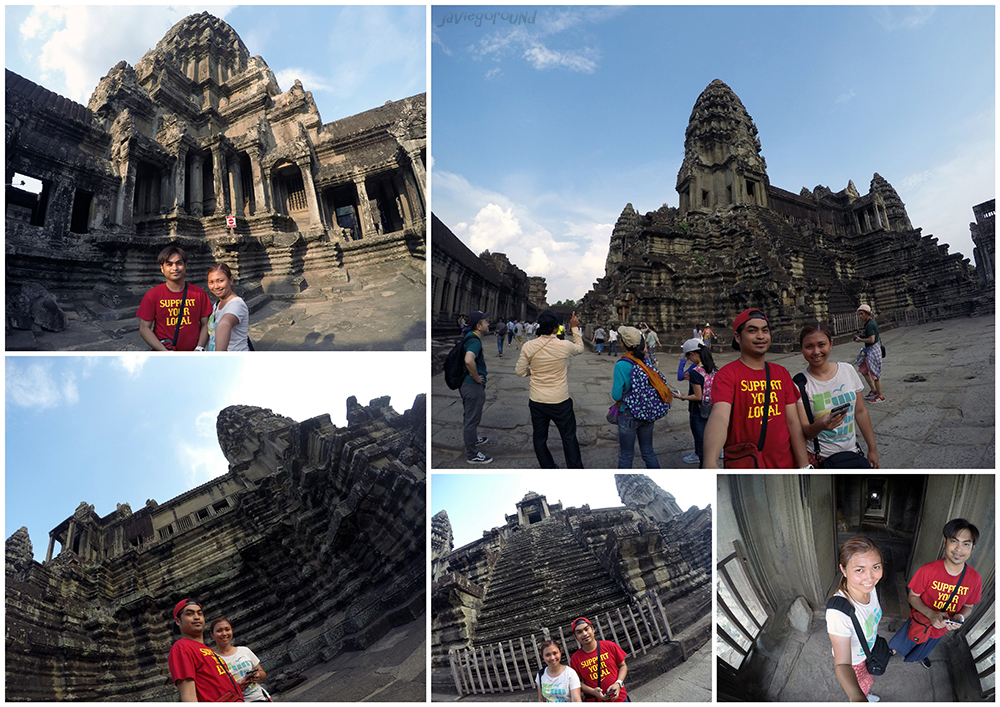 “The temple is a representation of Mount Meru, the home of the gods: the central quincunx of towers symbolizes the five peaks of the mountain, and the walls and moat the surrounding mountain ranges and ocean.” (source) 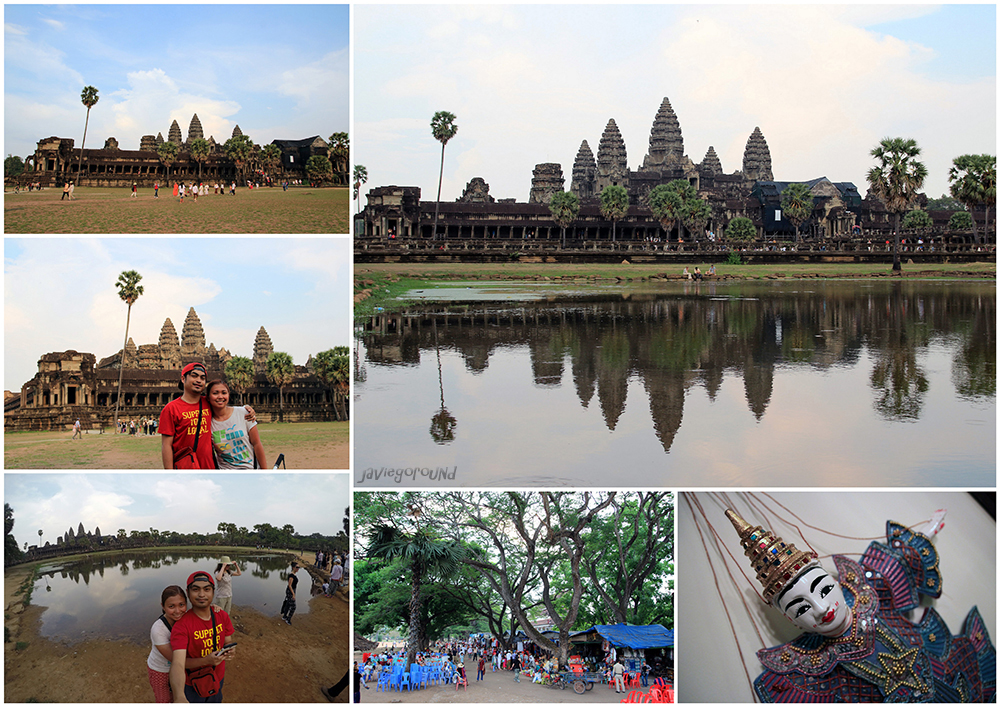 And of course, we had our own version of the famous reflection photo of the Angkor Wat. I also bought a $10 Khmer puppet for souvenir. 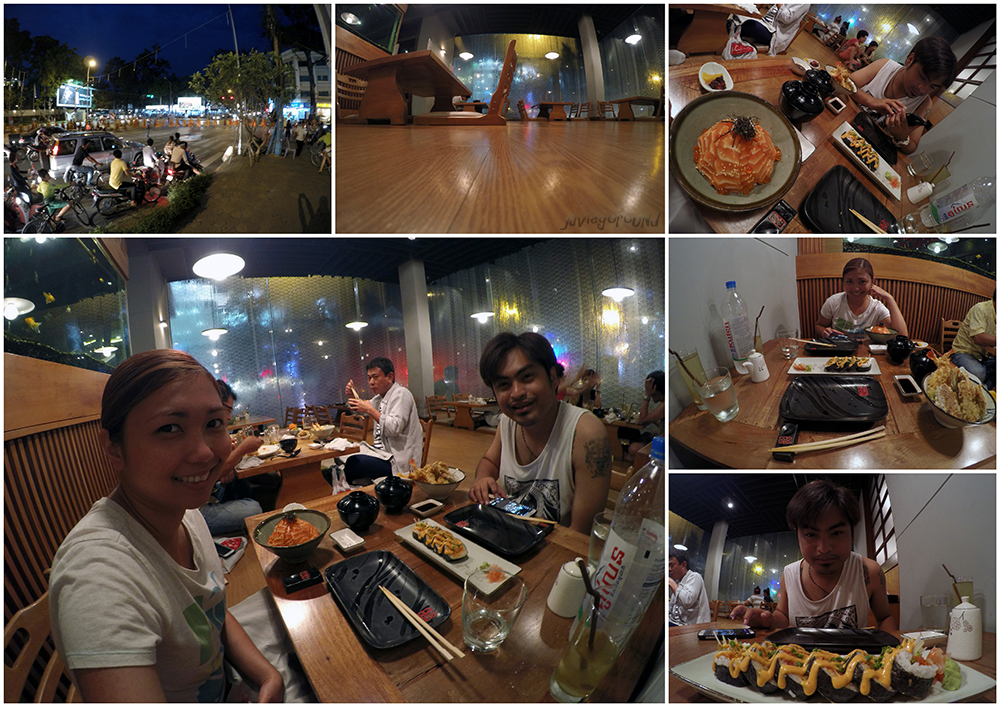 After resting for a bit, we walked from the hotel to the market to eat out. We saw a long procession of monks and nuns on the road. It was a holy day in Cambodia. We then arrived at The Hachi to get some Japanese dinner. It was our first time to eat sitting in Japanese style. It got us excited to see Japan. 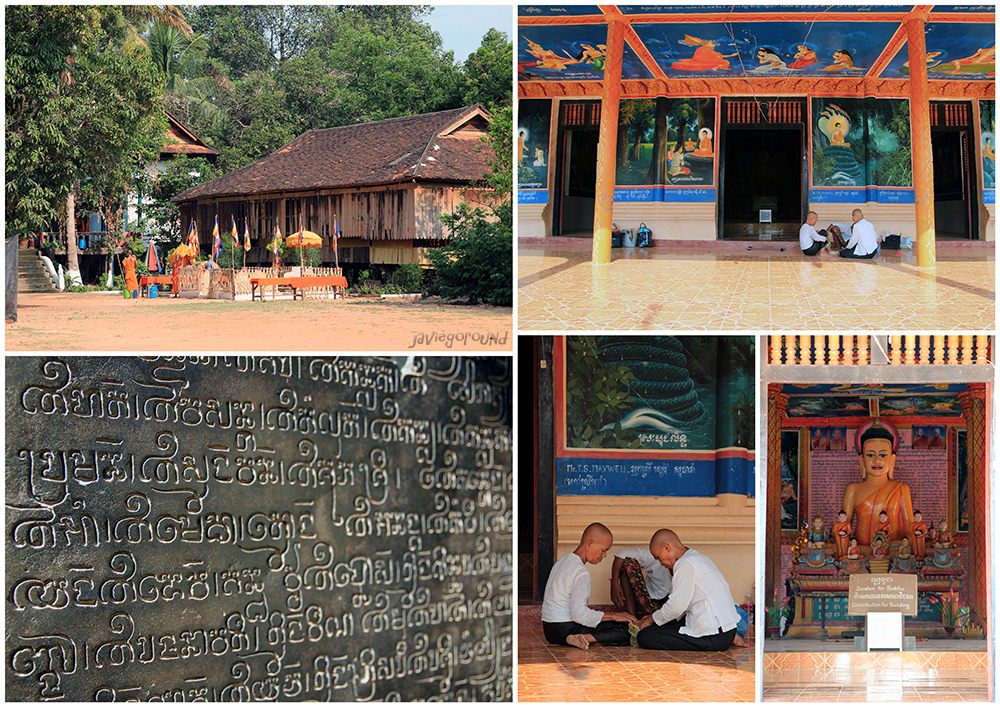 For our last day in Siem Reap, I changed our half day tour from PM to AM so that we could still rest before our flight at 10PM. Our first destination was Lolei. It used to be an island temple for the King Yasovarman I’s ancestors. It was currently under renovation when we visited. 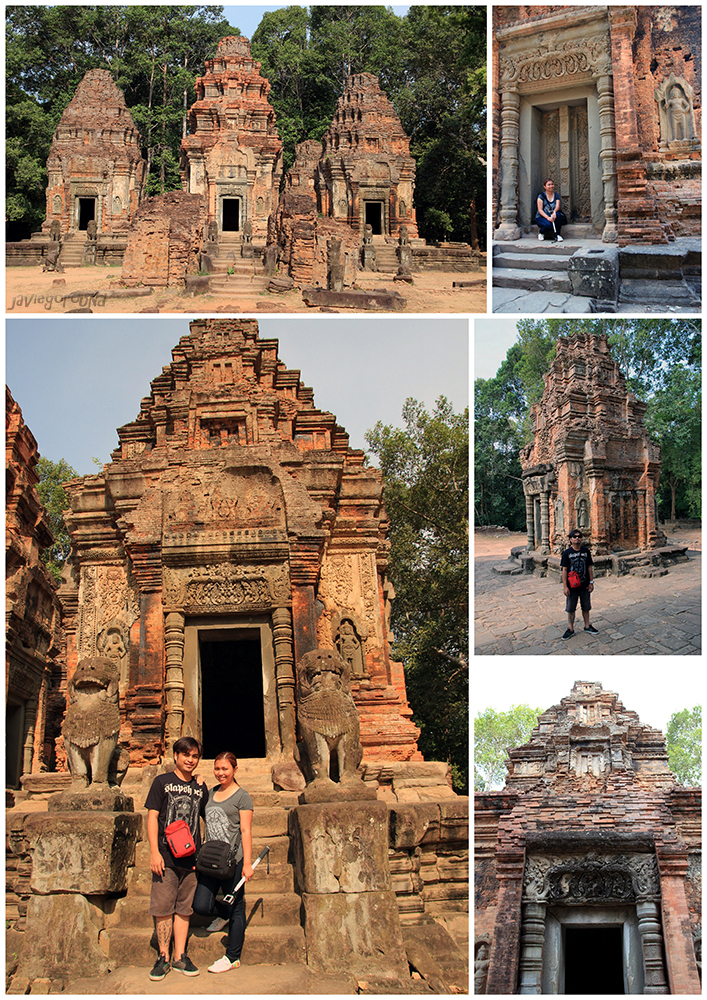 “Preah Ko (Sacred Bull) derives its name from the three statues of sandstone located in the front of and facing the temple’s central towers. These statues represent Nandi, the white bull who serves as the mount of Shiva. It was the first temple to be built in the ancient and now defunct city of Hariharalaya.” (source) 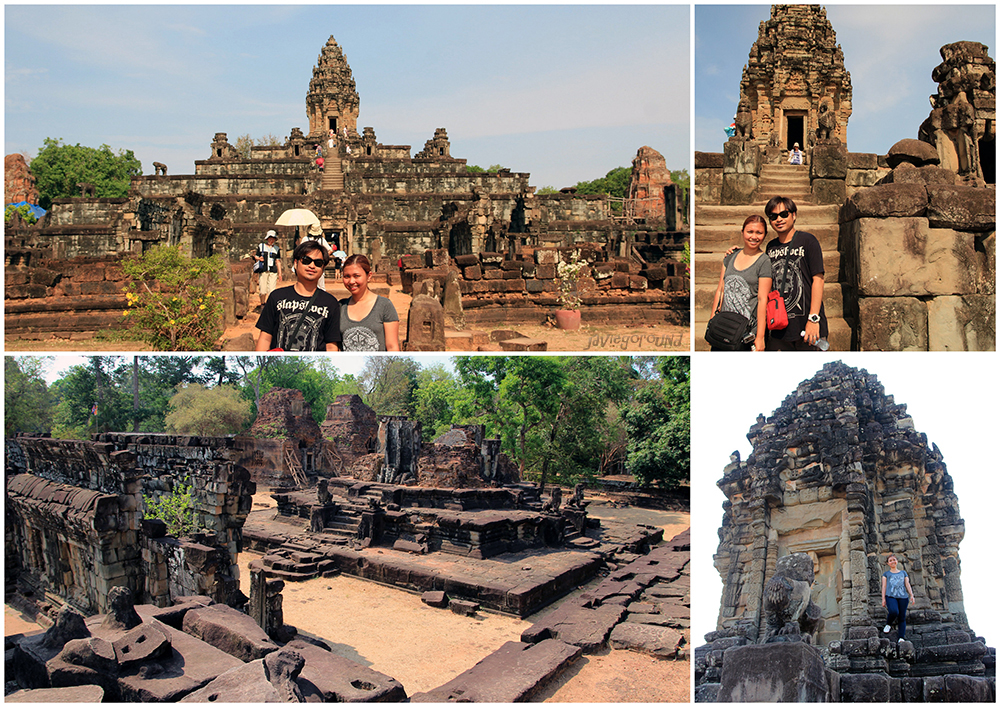 Bakong was the first temple mountain of sandstone at Angkor. It was also our last temple to visit, so we just took our time and sat for a bit in the shade. 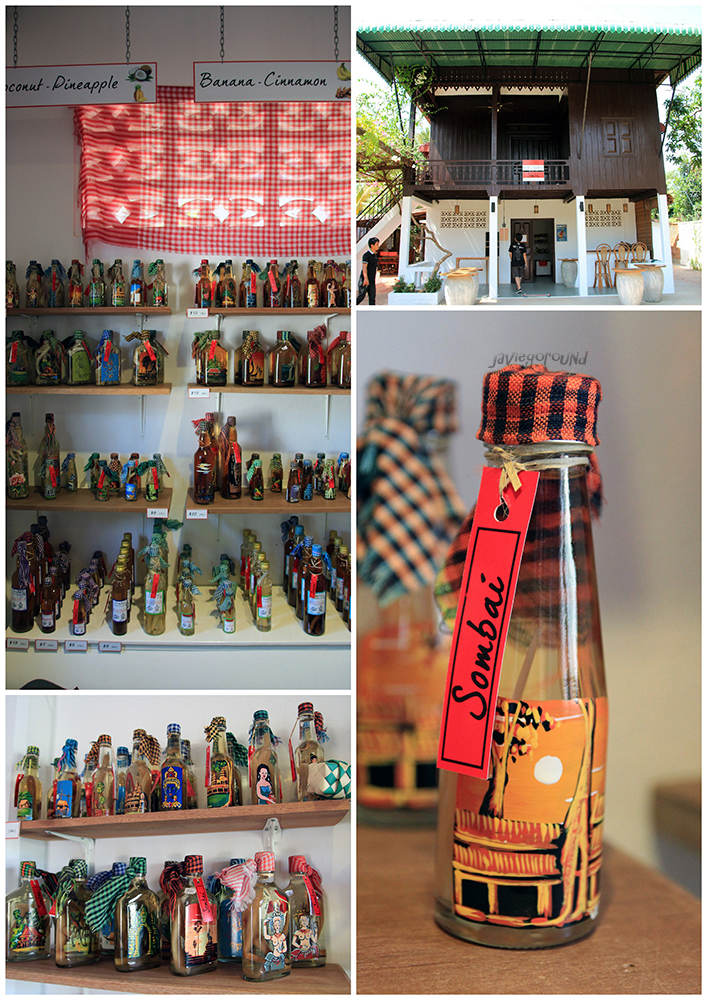 I found Sombai in tripadivsor while researching, so we asked Bomey and Khim to get us there for some wine tasting. They did not know where it was, so Bomey had to call them for directions. Sombai sell rice wines in painted bottles. We had free taste of the eight flavors. I bought a coconut-pineapple, anise-coffee and khmer salt and pepper. 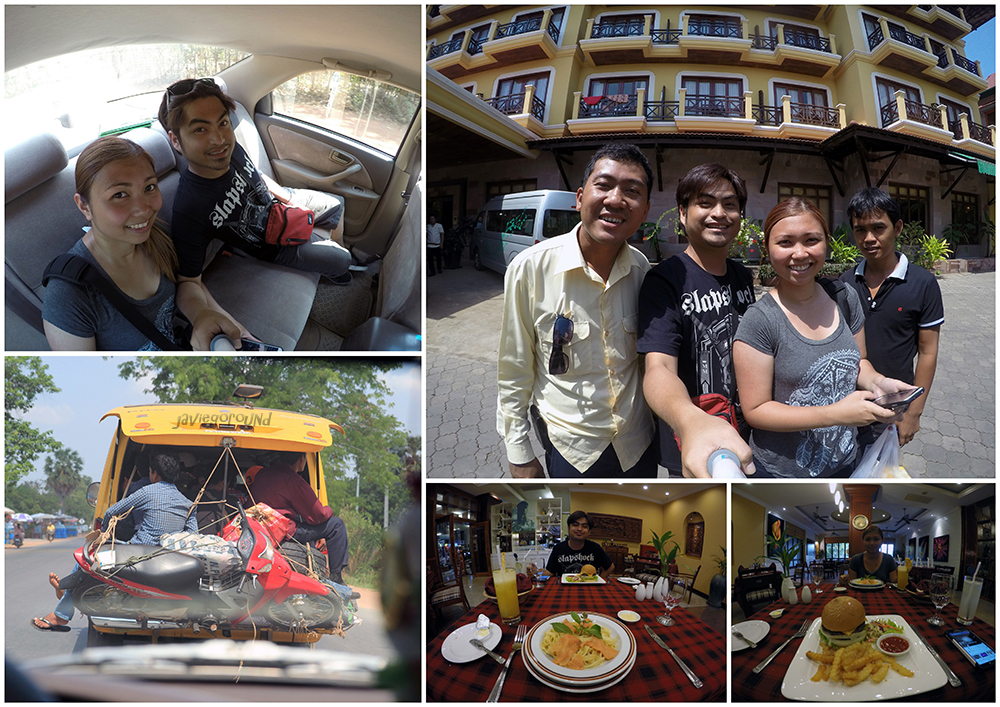 Siem Reap reminded us of the barrios in the Philippines and how simple life could be. I hope their government will extend the electricity to other remote areas. We ate our late lunch at the hotel’s restaurant and checked out at 6pm. It started raining when we got to the airport. It’s been an exhausting, but a great experience for two former HS classmates turned husband and wife to see the beauties of Thailand and Cambodia.

And here’s a video clip that sums up our Siem Reap tour:

One reply to “Siem Reap, Cambodia: the Great Gate to Angkor City”